On The Highway To Kim Jong Elle (#HorribleBosses)

The majority of people who work non-office jobs never really comprehend the immensity of the fuckery that goes on behind glass doors and polished Microsoft smiles.

I wrote this a while back to detail my short tenure in one of the worst workplaces my derrière has had the misfortune of parking itself at.  The below is 100% accurate and I still have PTSD from it (Post Traumatic Sambucca Disorder).

Revelations, Book 3, Chapter of the Motley Crüe, Book of Lemmy.

8.30am. Nervous Newbies (myself and Cool Colleague) are formally introduced to the Company’s members of staff, currently comprising of 4 people. Said 4 people do not acknowledge Nervous Newbies. Said Nervous Newbies are left to rot in the office, with no computer, for the next 3 hours in an atmosphere so tense, that both were actually expecting Bruce Willis to come, detonate a farty bomb and serve us slices of awkward with an extra bit of uncomfortable silence on top.

Nervous Newbies are left to lunch on their own, gazing into their £6.50 London Salad, covered in grease and smothered in TotalJobs.com lies.

In a sobering moment of  ‘Fuck social expectations, I’m gonna say what I think about this shit’, they exchange the simple words : ‘What. The. Fuuuuuuuuuuuuuuuck??!???‘

Narcoleptic Newbies bond over their synchronised eye-rolling – which their respective eyeballs launch into upon the viewing of the induction material, most of it dating from Moses’ times (pre-Hollywood days), just like the system we were meant to use.

Narcoleptic Newbies bitch on their way to the coffee machine and realise : 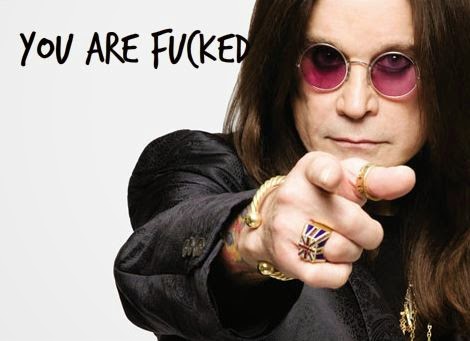 Numb Newbies talk about drinking alcohol at 8.35am.

Numb Newbies talk about jumping off the windows at 9.18am.

Numb Newbies talked into not talking by a managerial stare so powerful, it cancelled Bruce Willis’ second scheduled visit, and replaced it with a visit from Silent Bob. Yes, we were not allowed to talk for 8 hours, in an office the size of a ladies toilet.  When one of us committed the offence of emitting noises with their mouth, our very own Kim Jong Elle (from Germany) retorted with ‘ I don’t like people and their noises‘. *click click click*

Neurotic Newbies get cracking and stop crying.  Neurotic Newbies start gathering intelligence through internet sleuthing, and bribing of soon to be ex-colleague – with a Chicken Butterfly meal at Nandos. Results of the Sherlocking?

So, those of you who made it all the way down here, are probably shaking their heads thinking, what the fuck is this?  This cannot be real!

Well, in the name of the Holy Ozzy, The Lemmy & the Jimi, I hereby provide you evidence that was taken at the time. This all happened in 5 days.

For the Lord Windows 7 (and its Snipping Tool) are my witnesses, I have screenshat (I know right?) some of the office shizzle for posterity, and evidence to be brought up when I eventually let go of my mind, my clothes and my dignity and scream out of another corporate office.

Evidence #2 – Where I Come to Terms and Address my Nobility (context : I was producing PDF’s all day, “jd” = Job Description)

Evidence #3 – Where The Soon to be Ex-Colleague (in grey) makes the Newbies Wet Themselves.

Evidence #4 – Where The Soon to be Ex-Colleague (in black this time) Makes the Newbies Shit Themselves. Basically, Kim Jong Il kept peeking at people’ screens.

Evidence #5 – Where The Newbies Wipe Themselves and Decide to Drink Into Oblivion.

Evidence #6 Part 1 – Where The Newbies Wind Themselves Up Into Constipation.

The experience after those 5 first days deserves actually another post, this place was flipping insane. (It actually got worse after that – and I had to click my way out of this hell hole – case in point extract from a chat after visiting the new offices)

SO !What about you, what is your worst work experience? Any crazy stories? If you don’t have any, I have loads 😉

PS: By the way, the new post will also requires a special shamanic ceremony, involving a call upon the Fermented Spirits and a special shout out to my Power Animal, the Famous Grouse 😉

Like Loading...
careercareer changefunnygoth girlJobsarcasmunprofessional
Previous You Lose Some, You Win Some Next Photoshoot : Living Dead Girl

Well at least the story eventually has a happy ending.

Time to rock the sadness and flabbiness away!! I h

⚡It Takes Nothing To Join The Crowd, It Takes Ev

The Devil Wears Prada but he also Drives a Chevrol

🖤Prancing About In Prague🖤 I am still very u

Anybody else ready for some proper daylight?! As m

➡️"Learn the Rules Like a Pro so You Can Break

I'm excited for 2020 as am totally approaching it

Starting over again feels good !! I know it sounds